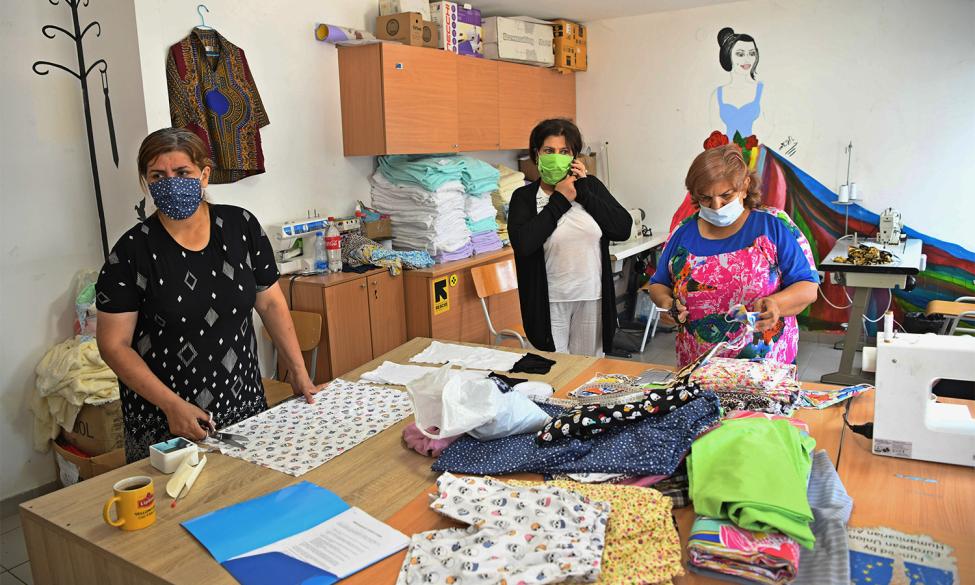 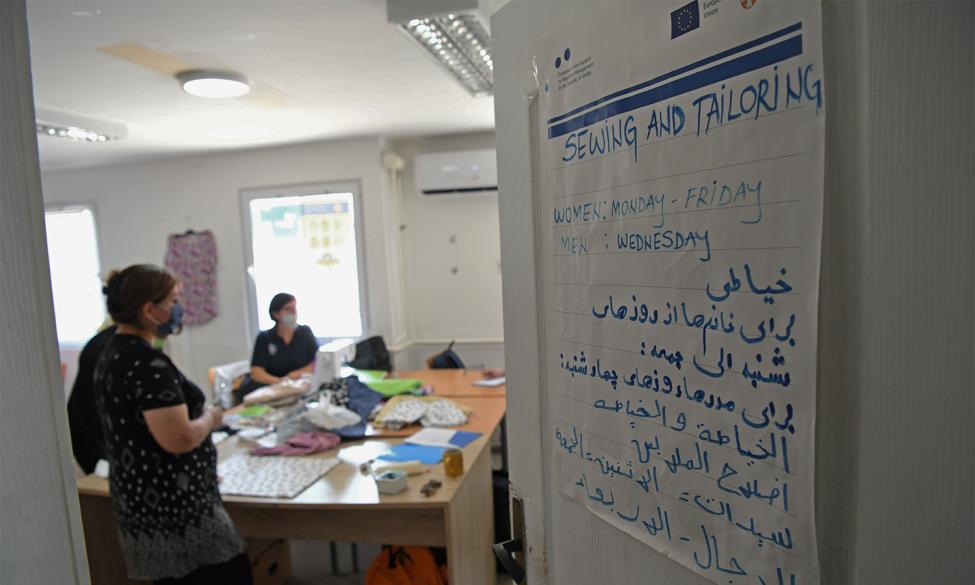 At the time when there were queues in front of pharmacies, with people waiting to see whether they were fortunate enough to buy no more than ten surgical masks – because most of the local production output and imports were going to hospitals and COVID-19 infirmaries – at the Asylum Centre Krnjača women worked two at a time, in two-hour shifts. Under the watchful eye of facilitator Dragojla Ocokoljić and assisted by Shahin and Kadija , both from Iran and who knew how to sew, the sewing workshop produced around a hundred canvas facemasks per day. Part of them were intended for the beneficiaries of this and other centres, employees of the Republic of Serbia Commissariat for Refugees and Migration (KIRS) and the International Organization for Migration (IOM), who stood side by side from the very beginning of the COVID-19 pandemic.

The workshop has been organized within an IOM project funded by the EU Instrument contributing to Stability and Peace, with the aim of preventing the spread and alleviating the consequences of the COVID-19 pandemic in the Western Balkans. So far more than 500 beneficiaries have taken part in it.

“We don’t have precise records on how much material we have used, nor how many masks we have produced, but I know that together we have worked on something that is very important and useful. When the COVID-19 [pandemic] started, we didn’t know how long it would last. We needed masks for personal protection, but we also needed something to distract us and help pass the time. This workshop was our salvation, and we were also happy that we could be of some assistance,” says Dragojla, who has worked as an IOM facilitator for the past two-and-a-half years.

While moving rolls of colourful fabric and boxes of thread and elastic bands, in order to clear a table for cutting out parts of a future dress, this former seamstress, who worked at what was once the Javor textile giant from Ivanjica, admits that she had some preconceptions about migrants before she came to the Centre. They were dispelled as soon as she started working with them, and today – having gone through the state of emergency together and through the most difficult days of the pandemic – she thinks that they have helped each other very much. She appreciated the support from IOM colleagues and staff members from the Republic of Serbia Commissariat for Refugees and Migration. They introduced her to the Centre and then to its beneficiaries.

“We gather here every day and work. We mostly sew masks and towels, at the moment we are also making canvas shorts for children, and we make the occasional dress. In addition to Shahin and Kadija, there are also two women from Iraq who come every day – and two men. They knew how to sew, but even those who sat down at the sewing machine for the first time did well,” Dragojla praises her students.

Many of them learned how to use scissors and sewing machines in only two hours, and in addition to masks they can also make other things, making alterations and mend clothes for children and for themselves. Even the language barrier is not a particular problem – if they get stuck, they call Fahim.

Fahim is a young Somali (25) who in addition to speaking Serbian fluently, also speaks Arabic, Turkish, Somali, Farsi, Urdu, Telugu, English, and is now learning French. He has been in Serbia since 2015, when he was granted subsidiary protection, and he works as a translator for the IOM. He has experienced many things for someone his age and he says that he is happy to finally be able to help someone.

In the beginning Fahim’s assistance in communication really meant a lot to Kadija (40), who came with three children from Iran to Serbia a year-and-a-half ago. Today this woman feels completely accepted, among other things thanks to her work in the sewing workshop.

“Back home, before setting out with three children from Iran to Switzerland, where my husband and one son live, I worked as a seamstress. That was my job and I was overjoyed when I realized that I could put both my hands and my mind to work. It meant a lot to me that we could do something useful, to make masks while COVID-19 was ongoing. Today we sew towels, adjust and mend clothes, and the time passes faster,” says Kadija, who hopes that her family will be together again soon.

Unlike her, another woman from Iran, Shahin (54), wants to stay in Serbia. She arrived three years ago, following her daughter and grandchildren, who have been in Krnjača for the past four-and-a-half years. They hope they will be granted asylum and that they will be able to start a new life here.

“I could work as a seamstress. That is what I did before I had children. Later I ran an employment agency, and then I lost everything. I’m not afraid of starting anew, I’m not afraid of the future, I just want a peaceful and calm life.”

Hanan (41) from Morocco would also like to stay in Serbia, even though one would expect her to want to go to Italy, where three of her children live. She has been here for the past two years because she likes the people. Back home she worked as a hairdresser and cosmetician. Thanks to Dragojla and her work in the sewing workshop, Hanan has learned another trade.

“They are all very hardworking. They are good women who like to help, who are there for each other, they take care of the children, so it isn’t difficult for me to make an effort for them,” Dragojla praises them. “Why should we stop when we’re doing so well. We socialize a little, we work a little, and in the end everyone is good.”

The Commissariat for Refugees and Migration, which manages the asylum and reception centres in Serbia, has made it possible for workshops for producing masks to also be organized at other centres. In collaboration with international partners and other organisations, and most often at the initiative of the migrants themselves, in the early days of the pandemic and the state of emergency, masks were being produced at the centres ranging from Sombor in the north, Adaševci, Šid, and Krnjača in central Serbia, to the centres in Bujanovac and Vranje in the south.