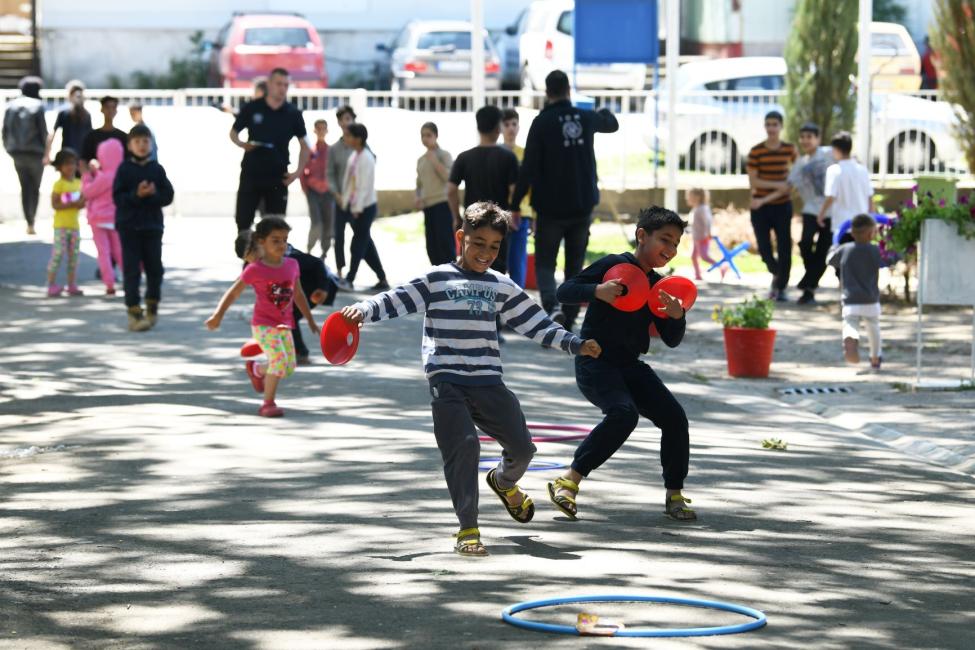 Unlike younger men from Arab, Asian and certain African countries – whose presence in Serbia stopped being surprising years ago, as one can see them on the streets in big cities, along roads and in villages close to the state border – it is uncommon to come across migrant families. Around 148 migrants – families from Syria, Iraq, Afghanistan, and Africa, including 50 children – were accommodated at the Šid Reception Centre during the last days of May 2021 alone. The numbers change from day to day, as some arrive, and the others are leaving.

The parents are weary from the thwarted attempts to cross the border, physically and financially exhausted, worried about the future, but the children, on the other hand, are cheerful and smiling, mainly because they are not aware of the situation that they are in.

Most of the children do not know of anything better. The youngest ones, born somewhere along the way, between the parents’ homeland and their destination country, cannot even imagine what it means to have a home, to have their own room, toys… There is a five-month-old baby among them. She is a girl from Šid – she was born in the Centre and her name is Jelena. Her parents were waiting for winter to pass, for her to get a bit stronger, and then to take a chance again and try to cross the border irregularly – to “get back in the game”.

“They are tired, exhausted physically, mentally and financially, but they are not giving up. Most of them don’t have a place to go back to, so they use this Centre to gather their strength and nurse wounds, between attempts to cross the border,” explains Center Manager, Commissariat for Refugees and Migration`s Nikola Sakan (28).

He is also responsible for coordinating with colleagues from the International Organization for Migration (IOM), the medical teams, volunteers from humanitarian organisations...

“Most of our residents, especially the families that have been living in the Centre for three years, are overcome by feelings of despair and of being stranded, fear for the future of their children. Since the beginning of the COVID pandemic, the principal worry has been for their lives and health. Adding to that the fact that they live in collective accommodation, not in their own home, it is clear that there are considerable relationships challenges, that their parental capacities are being put to the test, and that they need significant psychosocial and psychological support. This is exactly what we provide to them,” explains Irena Stojadinović, psychologist with the Psychosocial Innovation Network (PIN) non-governmental organisation.

Every Wednesday, with the support of a translator, Irena provides individual psychological counselling and support to families at the Centre. She says that children cope better with life at the Centre. They are young and the only things that matter to them are playing, socialising, and learning. Thanks to Dušan Škorić (29), who has been with them since last June, they can laugh again – sincerely, wholeheartedly, as only children can.

“I have been working with vulnerable groups for years, and since I am a pre-school teacher by vocation and am also originally from this region, from the village of Višnjićevo, it was natural to start working with the children. In the beginning we found it quite difficult to communicate, but then I started to learn Farsi and things are quite different now. I organise creative sports workshops for them, depending on their age, the weather, the current structure and number of children, and I am here to help them to do their schoolwork. The classes are held online, they have their assistants, but they also have me to jump in when needed.”

The kids simply love him, but Dušan does his best not to get attached to them because most of these families stay for a short period of time. As they continue on their path to Western Europe, they keep him informed of where they are, and once they have reached their desired destination, they invite him to join them.

Unlike Dušan, Aleksandar Sekelj has been an IOM facilitator for only two months. He runs the IT corner, which, similarly to the sports workshop, is organised within the current IOM project “Addressing COVID-19 challenges within the Migrant and Refugee Response in the Western Balkans”, funded by the EU Instrument contributing to Stability and Peace in Europe.

“The IT corner was created with the aim of enabling the beneficiaries to have some quality time and learn something that will be useful to them at school or work. Everything is adapted to the children’s age, but also to their interests. Unfortunately, there is no time for more serious work, as most of them stay here for a short period of time.”

It’s true, they do not stay for long, but it is indisputable that many of them leave Serbia empowered, encouraged, somewhat healed, and convinced that on their way they will come across other good people, like Nikola, Irena, Dušan, Aleksandar, Andrej, Doctor Sneža, and others who helped them in Serbia when things were the hardest.