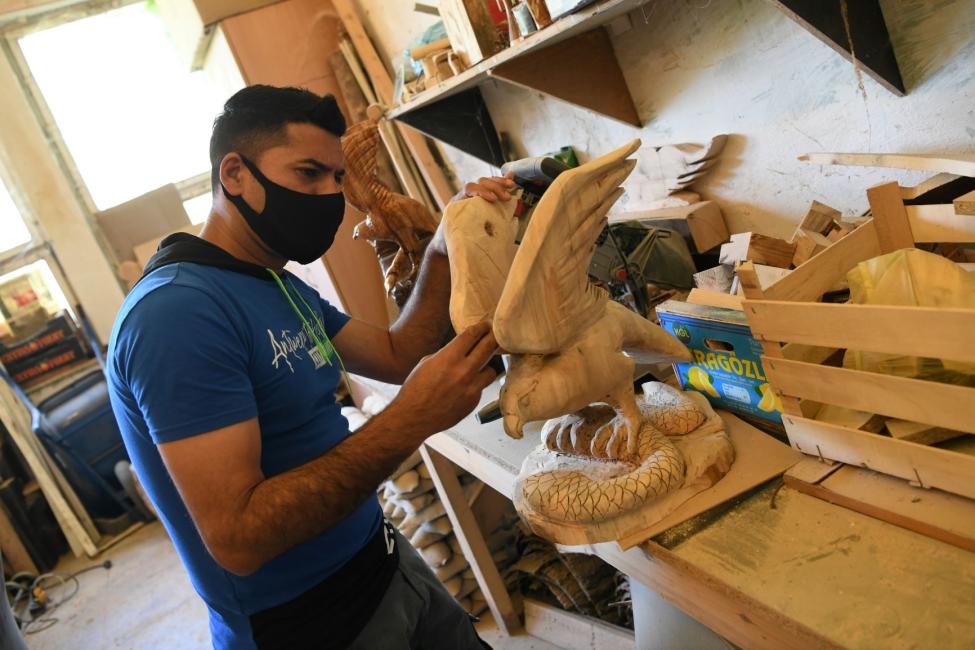 Azar working on new wooden figurine in RC Obrenovac_IOM May 2021

The three men are a strange combination – one that could only be concocted and orchestrated by life – to bring together three young men whose paths would have otherwise never crossed.

Azar Khan is from Pakistan, Bilal is a Kurd from the Syrian city of Qamishli, and Mohamed is from Mogadishu, Somalia. Azar speaks English and a little Serbian, Bilal communicates only in Arabic, and Mohamed, who frequently jumps in as a translator, speaks English and Arabic. Nevertheless, when the three of them are in the carpentry workshop at the Obrenovac Reception Centre for migrants, they do not need words and languages – they understand each other even without them.

Mohamed is recovering from three months spent in a prison in a neighbouring country, where he landed during his latest attempt to cross the state border. He was beaten, mugged, and arrested, but he is not giving up the idea of making it to Western Europe.

Bilal does not talk much about himself, but he is unquestionably a genuine artist with an amazing talent. He creates incredible wooden figurines, marvellous engravings, fixes benches and furniture at the Centre, makes stunning paints, and has also made two fountains. This young Syrian is also able to convey knowledge and motivate others to join him in his work.

Azar visits the workshop every day, even though he does not have Bilal’s talent for woodworking. He initially intended to master one more skill and pass the time by doing something nice and useful – and then he really liked it. The Centre has been his home for four years, and he hopes to get asylum and Serbian citizenship soon. Then, he might officially take the Serbian name Željko.

“Ever since I arrived to Serbia, everybody has kept telling me that I look like Željko Joksimović. At first I thought they were joking, but then I noticed the resemblance – so that’s what they call me at the Centre now”, says this 30-year-old, who set out from Pakistan four years ago, for Western Europe – Germany, Belgium or Denmark – who stopped in Serbia to gather his strength before continuing on, but then decided to stay indefinitely.

At the border with Iran, police opened fire on the column of people that he was in. He successfully reached Turkey; from Turkey he made his way to Bulgaria, and from Bulgaria to Serbia, which is where he says his journey ended. He says that he has never met people like those in Serbia. Nowhere – not even in Pakistan – has he felt so happy and so accepted as he does in Serbia.

“My family is here and I want to stay in Serbia,” continues Azar and adds that regardless of how good he feels, he misses his sister and mother, whom he has not heard from in a long time.

He is worried about them, since life in Pakistan is neither great nor easy.

“I hope to build a better life here. I want to find a job and this is why I am learning new skills. I am a certified male hairdresser, painter and decorator, and during the COVID pandemic I studied carpentry.”

The carpentry workshop that Mohamed, Bilal and Azar visit daily, has been organised within the current project “Addressing COVID-19 challenges within the Migrant and Refugee Response in the Western Balkans”, funded by the EU Instrument contributing to Stability and Peace and implemented by the International Organization for Migration (IOM). The beneficiaries are men from Syria, Iraq, Iran, Pakistan, Afghanistan, Palestine, who mostly stay at the Centre for a short period of time. There are 340 of them at the moment. The fluctuation is high, especially now, when the weather is nice, when migrants become more active, looking for ways to cross the border and reach countries in Western Europe.

Five or six residents visit the workshop every day, but when there are organised landscaping and repair activities at the Centre – from cleaning the yard to making and repairing the furniture for dormitories and other common areas – then there are far more participants, between 50 and 100 per month.

This type of psychosocial activity helps the Centre’s residents to make use of their time, the IOM facilitators explain. The goal is for them to become enriched, relaxed and fulfilled, and ultimately – it is not a bad idea to learn something new. Many have left the Centre with internationally recognised certificates in English from the Božidar Adžija People’s University as painters and decorators, male hairdressers, masseurs, which have been useful for them at their final destinations.

During the state of emergency in 2020, different activities were organised for migrants, in cooperation of the IOM and the Commissariat for Refugees and Migration (SCRM), aimed at overcoming the isolation. The migrants played sports, attended creative workshops and various psychosocial support activities. All epidemiological measures were upheld, and the Centre was equipped with posters containing information on the pandemic and the epidemiological measures that help prevent the spread of the infection. Thanks to this, the number of infected persons was negligible, and among those sporadic cases, there were no more serious cases, nor did the infection spread.

The focus was on overcoming a new way of living and the stress, which was more pronounced than usually, but thanks to their hosts, the SCRM and IOM staff, who were always at hand, they overcame everything more easily.

“Exactly as families do,” reminds Azar, a.k.a. Željko.